BNP Exclusive: Proof that the London riots WERE about race - Two-thirds of offenders were non-white 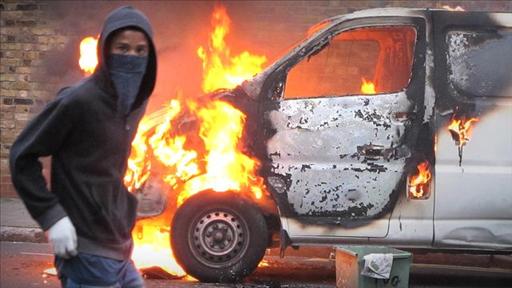 Two-thirds of those charged with offences during last year’s London riots were racial foreigners, an exclusive BNP investigation has found.
The information was provided by the Metropolitan Police Service (MPS), following a Freedom of Information request by a British National Party activist.
The data shows that 65 percent of those charged for crimes following the August 2011 riots were non-white, whereas just over 33 percent were ‘North or South European’.
The information vindicates the BNP’s assertion that the riots were race-related and not ‘youth-related’ as the biased anti-white media pretended.
In total, 2,663 people were charged with criminal offences by the MPS as part of Operation Withern, which was set up to deal with the London riots.
Of those, 1,455 (54.6 percent) were black, 792 (29.7 percent) ‘North European’, 204 (7.6 percent) Asian, 106 (3.9 percent) ‘South European’, 11 (0.4 percent) Chinese, Japanese or SE Asian, and 33 (1.2 percent) unrecorded or unknown.
The racial disparity of the statistics is made all the more glaring by the fact that whites make up 69.4 percent of London’s population, according to ONS estimates from 2006, the most recent available.
According to the same figures, only 10.7 percent of the population is black.
The same FOI request also shows that blacks and other non-white ‘minorities’ are responsible for the majority of ALL violent crime committed in London in 2011.
Please see this report for full details.
You can see the full FOI response here. 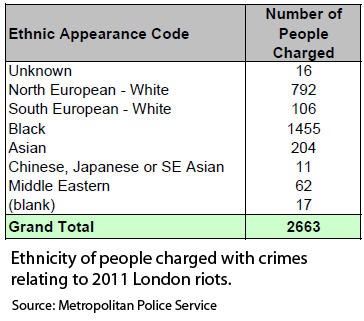